Anointing of the sick 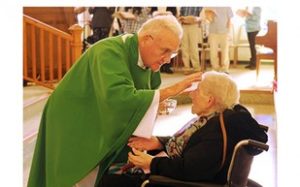 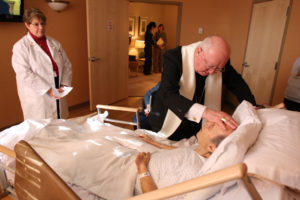 What is Anointing of the Sick?

The Catholic Sacrament of Anointing of the Sick, formerly known as Last Rites or Extreme Unction, is a ritual of healing appropriate not only for physical but also for mental and spiritual sickness.

The Rite of Anointing tells us there is no need to wait until a person is at the point of death to receive the Sacrament. A careful judgment about the serious nature of the illness is sufficient. The Sacrament may be repeated if the sick person recovers after the anointing but becomes ill once again, or if, during the same illness, the person’s condition becomes more serious. A person should be anointed before surgery when a dangerous illness is the reason for the intervention (cf. Rite of Anointing, Introduction, nos. 8-10).

Moreover, “old people may be anointed if they are in weak condition even though no dangerous illness is present. Sick children may be anointed if they have sufficient use of reason to be comforted by this sacrament. . . . [The faithful] should be encouraged to ask for the anointing, and, as soon as the time for the anointing comes, to receive it with faith and devotion, not misusing the sacrament by putting it off” (Rite of Anointing, nos. 11, 12, 13).

Only bishops and priests may be ministers of the Sacrament of the Anointing of the Sick.